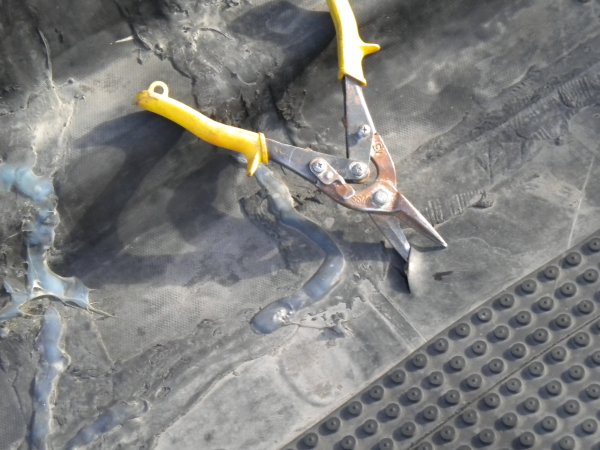 As shown in the picture, this puncture in a roof in Newton MA could have been prevented by the HVAC contractor. Not only did he cause a puncture in the roof he also did not make the building owner aware of it, thus a leak occured.

Lucky for the building owner the roof was well pitched and we had a couple of nice days in order to patch the roof and the damages were not that severe.

This roof being an EPDM roof and the temperature in the 40’s made this a simple patch. Had this roof been covered with snow the tear might have been a lot more difficult to find and repair, and may have caused extensive damage in side.

Inspecting your roof prior to the on set of snow and cold weather could prevent a lot of the issues encountered in the winter months. This leak could have been caused days, weeks and possibly months ago and have gone undetected for sometime causing damage to the insulation and roof deck. The snow built up and slowed the melting snow from flowing to drain making the water seek the easiest route the tear.

Traffic on a roof causes more problems other than normal wear and tear. By keeping traffic down and watching and communicating with contractors on roof a lot of damage could be prevented. Also these roofs require maintainance especially if there are drains which should be checked frequently.